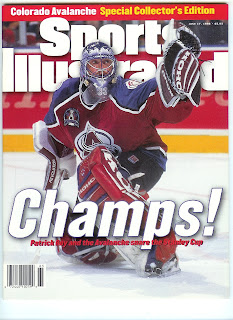 On June 10, 1996, with a 1-0 win in triple overtime the Colorado Avalanche completed a 4 game sweep of the Florida Panthers to become Stanley Cup Champions. The goaltenders John Vanbiesbrouck and Patrick Roy went toe to toe in the 4th and final game of the series, Vanbiesbrouck stopped 55 of 56 and Roy didn't let one of the 63 shots he faced reach the back of the net. Uwe Krupp scored the game winner at the 4:31 mark of the third overtime to bring the Avalanche their first title since they relocated from Quebec. Roy stood on his head throughout the series, he stopped 147 of 151 shots for a save percentage of .974. Joe Sakic scored 18 goals throughout the entire playoffs which earned him the Conn Smythe as the playoff MVP.

Watch The Game Winner And The Celebration That Followed: http://www.youtube.com/watch?v=WFagHafmvaU
Posted by Wade Forrester at 12:41 AM