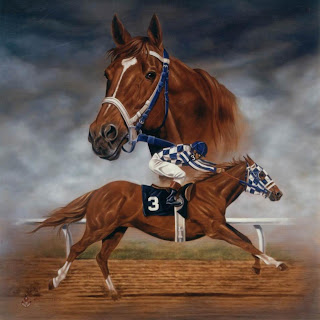 On June 9, 1973, with a win at the Belmont Stakes, Secretariat completed horse racing's most coveted  achievement the Triple Crown. He broke records at all three races in the series which began at Churchill Downs in the Kentucky Derby. In the three races leading up to the Derby, Secretariat cruised to 2 wins before a third place finish in the Wood Memorial. He came into the Derby and set records through each quarter mile stretch on the way to setting a track record. The victory at Churchill Downs was by 2 1/2 lengths over the next contender, Sham. The magic continued in Baltimore at the Preakness, he made a legendary move on the first turn of the race that took him from last to first in the blink of an eye, once he got the lead no other horse could challenge him. He set another track record and once again Sham was tailing him by 2 1/2 lengths at the finish line. He was just one win away from becoming the first Triple Crown Winner in 25 years. Only four horses which included Sham challenged Secretariat at the Belmont Stakes in New York. Sham and Secretariat set the pace early by opening up a ten length lead on the rest of the field. As they continued Sham began to tire and fell off the pace so drastically he came in last place. Secretariat continued to run straight into the history books by 31 lengths, he not only broke the track record at the Belmont he ran the fastest 1 1/2 miles on dirt in history and  the 31 length margin shattered the previous record set by Triple Crown winner Count Fleet who won by 25 lengths in 1943.

The artwork was done by Rick Timmons yo can view more of his work here: http://www.locogringostudios.com/equine.html
Posted by Wade Forrester at 1:29 AM