December 29, 1999 Wilt Chamberlain became the first player in the history of the NBA to have his number retired by three different teams. 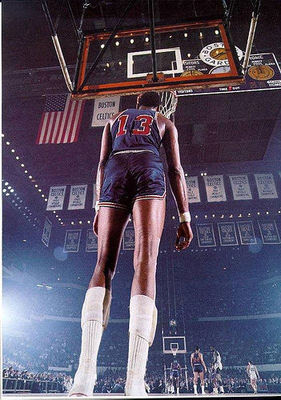 December 23, 1999, the late Wilt Chamberlain had his number retired by the Golden State Warriors, Chamberlain became the first player in the history of the NBA to have his number retired by three different teams. It happened during halftime in a game against one of Chamberlain's former teams, the Philadelphia 76'ers. The Warriors presented Chamberlain's family a jersey, then lifted his #13 to the rafters at the Oracle Arena. Chamberlain's number had already been retired by the Philadelphia 76'ers where he won the NBA Champion ship in 1967 and it also been retired with the Los Angeles Lakers where he won a title in 1972. His Hall of Fame career began in 1959 with the Philadelphia Warriors. In his first year in the league he shattered rookie records and ended up being named Rookie of the Year and League MVP, a feat that has only been matched by Wes Unseld who won both awards in the '68-'69 season. By the end of his first year in the league he led his team to a playoff series win over the Syracuse Nationals then to the Eastern Conference Finals where they were knocked out by the Boston Celtics. In his second year in the league Chamberlain put up ridiculous numbers, he became the first player to break the 3,000 point barrier and his 2,149 rebounds not only made him the first player to get 2,000 rebounds in a season he is the only player to have ever accomplished the feat to this day, during that season he set the record for rebounds in a game with 55. The Warriors would end up being knocked out by the Syracuse Nationals in the first round, some blamed Chamberlain others blamed the coach, in the end it doesn't matter because both coach and player shared the responsibility for the team not advancing. In his third season under new coach Frank McGuire, Wilt put up numbers that players only dream of, he averaged a record 50.4 points a game then added 25.7 rebounds per game to that, and definitely not to be forgotten it was the same season Wilt put up his jaw dropping 100 points in one game. By the time the '61-'62 season wrapped up, Chamberlain became the only player to ever surpass 4,000 points in one season, only Michael Jordan joined him in the 3,000 point club after the '86-'87 campaign. In the 1962 playoffs the Warriors met the Celtics again in the Easter Conference Finals, this time losing to Boston in 7 games. Many criticized Chamberlain for averaging 50 points per game but not winning the title with the Warriors, I would say to them one man does not make a team and they would not have been where they were if it wasn't for his great play. The following year the Warriors franchise was sold to a group of California businessmen, the team then relocated to the West Coast and became the San Francisco Warriors. The move caused problems within the organization, Paul Azrin chose to retire rather than move his family out of Philadelphia and Tom Gola requested a trade to the Knicks so he could be close to his family. Even with Chamberlain having a solid year it wouldn't be enough and the Warriors missed the playoffs. In the '63-'64 season Chamberlain and the Warriors bounced back, they teamed him up with Nate Thurmond who was a great young center and together they led the team all the way to The Finals. Unfortunately for Chamberlain he would meet the Celtics and lose the series 4 games to 1, once again Boston ended his quest for a Championship early. The next year in San Francisco was rough from the start for the Warriors, with the team struggling on the court and the ownership suffering from financial strain they decided to trade Chamberlain to the Philadelphia 76'ers at the 1965 All Star break  In his six years in a Warriors uniform he averaged 41.5 points and 25.1 rebounds in 429 games, it was just a start to a great career. He would go onto have great success as we all know but no matter what he did after he left he always started off his NBA career in a Warriors uniform. I do think it was a great thing for that organization to recognize that he was one of the greatest to ever play the game, and they were lucky to have him be part of their franchise.

Don't forget to follow On This Day In Sports on Facebook at https://www.facebook.com/OnThisDayInSports
Posted by Wade Forrester at 2:50 AM