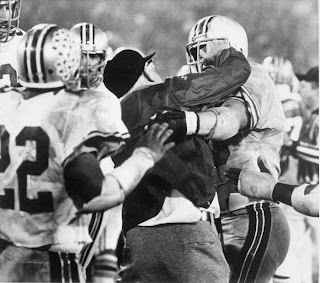 December 30, 1978, Ohio State University decided to part ways with the legendary coach Woody Hayes. Hayes departure from the university came after just one day earlier his Buckeyes took on the Clemson Tigers in the Gator Bowl. With the Buckeyes down late in the fourth quarter 17-15 they were on the move when Buckeyes quarterback Art Shlichter sailed one wide of his running back, the pass was intercepted by Clemson Nose Guard Charlie Bauman, he took the ball and rumbled his way down field and was then tackled, ending up out of bounds on the Buckeyes sideline. When he got to his feet all hell broke loose, Hayes lost his cool and punched Bauman in the throat. With the sideline in pandemonium the Buckeyes were assessed a 15 yard unsportsmanlike penalty on that play. Then the Buckeyes were penalized again for Hayes stepping onto the field of play at a time when he shouldn't have, there was some confusion in the booth whether the coach grabbed an official or not, either way that cost his team 15 more yards. Clemson was able to run the clock down to zeros and sealed up a Gator Bowl victory for their school. The administration at Ohio State was embarrassed by the actions of their head coach and decided to relieve him of his coaching duties. It was  the end of an era for Buckeyes football.

Here is a video of the incident involving Coach Hayes and Charlie Bauman:
http://www.youtube.com/watch?v=HmoIjMr1BZs

The incident was an unfortunate one because Hayes was a great coach. His temper just got the best of him and there is a good possibility it cost his team the game. When a coach loses focus it has a ripple effect through his team, with the game so close it's hard to say whether the outcome would have been different. Hayes had several temper issues through the years. In 1956 he attempted to punch a reporter and missed, he ended up hitting a sports editor instead of his intended target. Then  in 1965 there was an incident in which Hayes damn near got into a fist fight with the athletic director from Iowa State, both parties had to be restrained. Before the Buckeyes took on USC in the 1973 Rose Bowl, Hayes lost it with a photographer, shoving a camera into photographer's  face ultimately cost Hayes a 3 game suspension, a $2,000 fine and his team would lose that day. In a game at Michigan in 1977, Hayes charged an ABC cameraman when he saw him recording his frustration after an Ohio State turnover, this would cause the coach to be put on probation and hit him in the pocketbook for another $2,000. The incident with Bauman in the '78 Gator Bowl would be the last time he lost his cool as a head coach, Hayes retired from the game altogether following his firing from Ohio State. 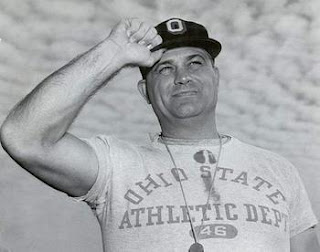 When I say it was unfortunate I mean it because it was the end to a great career that started in 1946 at Denison University out of Granville, Ohio, he spent two years there before taking a job as head coach at Miami of Ohio where he also spent two years, he then took on the job that defined his career at Ohio State. With the Buckeyes he had great success, winning 5 National Championships and 13 Big Ten titles. In his 28 years at the helm of the Buckeyes he would post a 205-61-10 record, which are numbers that speak for themselves. 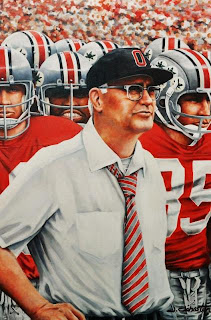 Hayes also stared adversity in the face, in a time when racial inequality was high he not only recruited and brought African Americans into start for his team, he also hired African American assistant coaches. It was said that Hayes treated all people the same, which gives me great respect for the man. Hayes was well respected by his students and he held a high academic standard  which brought respect from his peers. As the first head coach to introduce film to help teach his players, Hayes was also an innovator. When I look back at the career of Woody Hayes I look at it with great admiration, however I also do see a lesson in there, as adults we all have to know when to pull the emotions back, when we make bad choices there are always consequences to pay. Even with this fact being based on one what was probably the worst day in the career of Woody Hayes, he was still one of the greatest coaches of his time. I think it's safe to say he had many more good days than bad days in his career.

The painting of Woody Hayes was done by Jay Johnston, you can view more of his work at http://www.jjohnstonart.com/

Don't forget to follow On This Day In Sports on Facebook at https://www.facebook.com/OnThisDayInSports
Posted by Wade Forrester at 2:19 AM